It took Morimda years to have the courage to tell people what she did as a life model. Liz does not have that burden but in her life she will not tell many about this new side of her. This information is restricted to the few who are from that art world of like minded people. Liz has a cover like a mask – her normal job which is what the rest of the world may know about her.

For 20 years she was unhappy in her job and did not address the fact that artistic and sporty sides to her were not being fulfilled. She now approaches life modelling as a slightly older woman who is generally less confident about her body, and she experiences a shift as she accepts her own nudity.

Liz was pleased to find other professionals (as in not life models) taking part in Spirited Bodies. It suggested she may be with others experiencing something similar; the ennui of working life and the duality of clashing worlds. Her drama teacher has told her she is too controlled, so partly through life modelling she aims to be freer. 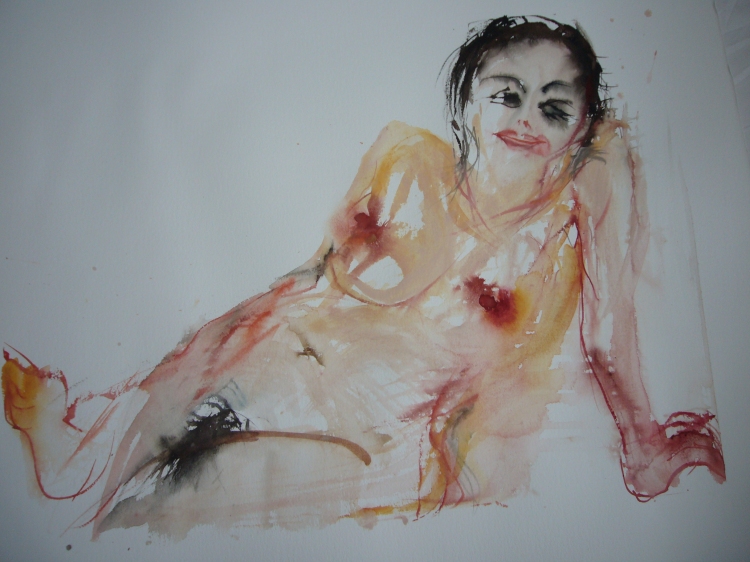 She also thinks that as she gets older she will become more interested in nude modelling, to face the challenge of continuing to love herself. Now that she has found this joy that makes her feel special, she does not want it to end. She says there is a need for more images of both naked and clothed older women to emerge and proliferate.

In her drama class she has met lots of people her age with professions who like her, crave change to something more spiritual in their lives. Spirited Bodies she says, is a bit like acting, as when life modelling/acting, the social mask is off. You must be yourself and that has a big appeal.

The shift in Liz started to happen a few years ago when living in another country from her best friend – her sister – she realised she was unhappy with her job, and her sister was there to advise her. A spiritual teacher was visiting her home town and giving classes to her sister. Each week on the phone information was shared.

She noticed that her ‘friends’ judged people by where in London they lived, and when she told them she was doing an acting course it was a huge shock for them and they had no encouragement for her. She says another course would have been acceptable in gardening or sewing for example, but acting was considered a waste of time as it ‘should’ be something pursued when younger. At her age people judged she ought to have settled more. Instead she is still curious to explore.

“My career is about knowing myself and being happy”, she told bewildered former friends!

Her drama teacher told the class, “If you came here to learn how to act, you came to the wrong place.” Instead acting is about stripping away the mask.

With many thanks to Liz and Morimda

One thought on “Part 3: A Woman in Transition”