Returning from a workshop of ours I mused that we are teaching people how to be naked! It ought to be natural. It is!
Today I took a Spirited Body to work and I don’t just mean my own. James couldn’t make any of our workshops but through emailing I could tell he was pretty nervous. He wanted a chance to try out on a smaller scale and talk about the experience face to face which can make all the difference. I checked my schedule and thought my session with ‘Arts For All’ in Shoreditch might be just the ticket. I asked fellow life model Lydia Julien who volunteers at the charity, running the session what she thought, and after checking with boss Caroline Barlow she said they welcomed the chance to have 2 models for the price of one! They also fully supported my initiative which matches their own to make art available to people who might not otherwise get to it.

“We believe strongly in inclusion and, at Arts For All, people from many different social and cultural backgrounds unite in friendship and creative exploration.” http://artsforall.co.uk/

The class really enjoyed the opportunity to draw from 2 models and were a lovely supportive environment for James’ first time. Lydia let me plan the pose schedule according to my requirement to best instruct in life modelling.

James was incredibly nervous at first and it took a bit of prodding from me to get him to remove his clothes! He didn’t want to draw and just looked awkward at the side so I did push him, knowing that once he got past the first hurdle, it would start to get easier.

After the 1st pose he quickly got his shorts back on again, probably worried I would lure him into some further trickiness should he remain unguarded… so he stood out while I rocked on alone for 10 minutes. For the 15 minuter I had an idea to make him more comfortable, offering him a seat while I again stood. 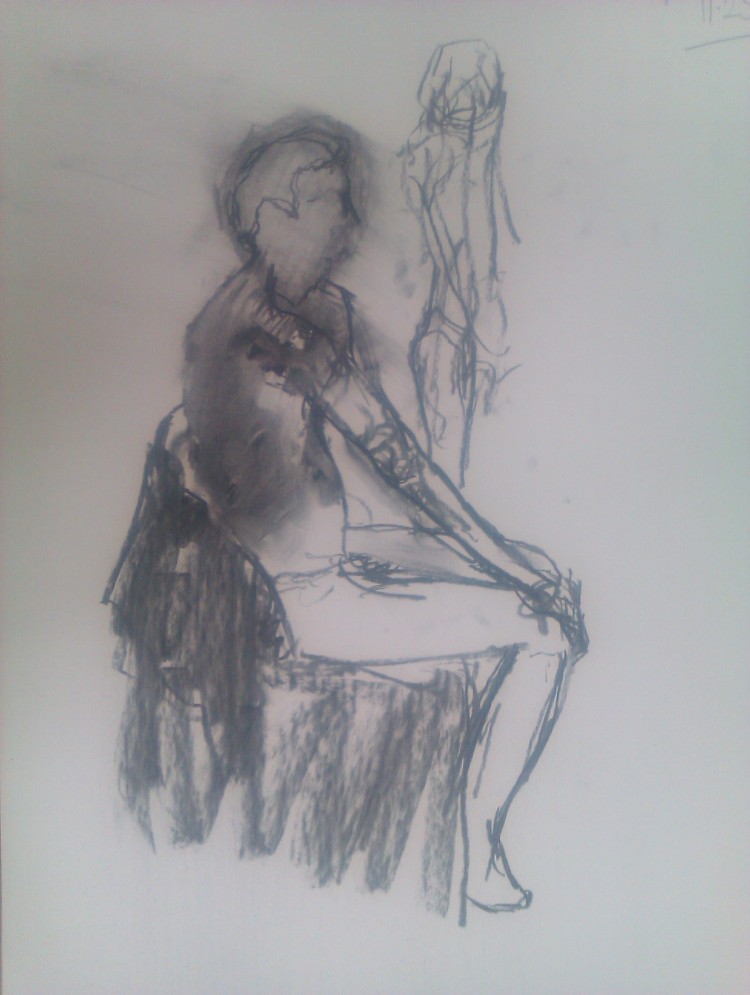 From 15 minutes we went straight into half an hour, so that by midday (tea break time) James had experienced a variety of poses. I asked him to lie down however he wanted for this while I took a seat.

In the break we caught up with the artists who were very encouraging, pointing out which parts of James they liked to draw.

The main event after tea was a long pose where I lay and James sat.

Lydia was ecstatic by the end – she is always very happy but I could tell she loved the ambience as much as I had of initiating a newbie in the art of the pose. She’d been showing him her work as we went along so he could understand how well he was doing and see what was coming out well. Caroline too was really enthused by the experience and James was invited to model on his own some time! He couldn’t quite believe it, it felt like such a big leap.

We went for coffee after to pick up the bigger picture of the event and James’ background. He is depressed in a full time ‘proper’ job which drains him and leaves him feeling a mug. There have been major body issues of a particular kind in his past which I have asked him to write about separately, as I think this will resonate with many men. It was great to get to know another of the new cast of Spirited Bodies for Saturday’s exciting event. What a brilliant morning and I feel positive that James is so much closer to feeling confident about the 20th.

Caroline Barlow said that Spirited Bodies are welcome to try out at Arts For All life drawing sessions in future, with or without me. If they approach her alone she will want to meet them first. She has given many new models their first opportunity, already aware that her group is the perfect environment for welcoming and putting at ease a nervous model.