In this second instalment Lucy speaks to LaDawn and Sabine, who have both modelled with us a few times and taken up some professional life modelling, as well as to Tansy who first life modelled with us at our first event when she was 17 (with parental consent). She is now 20 and a London based life and photographic model.

LaD: In July 2011 I was holding down a job – I was a high powered IT operations director for a really large FTSE company, and I had a nervous breakdown. By October I was unable to drive my car or leave the house, I had zero, zero confidence. I made two suicide attempts, I spent 6 months in a psychiatric clinic, and there was nothing of me left. Coming to Spirited Bodies was a way of… I thought it was just going to be one go, I thought it was going to be the October event at Battersea. I did the workshops and I found these to be very calm, very safe, very empowering. I felt like I could probably cope with this, and we went to Battersea Arts Centre and I think it probably changed the trajectory of the rest of my life. Because I started thinking of myself as a work of art, regardless of whatever shape my body is in, or whatever condition my mind was in, I completely changed my whole approach to life. So when I see you as artists out there drawing us and regardless of whether someone wants to stand up and say it’s a good drawing or a bad drawing, the fact is that it is art, and it’s of us women with all our flaws and breakages. We’re all broken in some respects and it was my experience with Spirited Bodies that propelled me on to a path of almost wellness where I felt I had the strength to move ahead with my life and to gain my confidence back.

FLS: I got into modelling because I’d been ill and I know for me one of the things that I like is the fact that I could help other people achieve their dreams, I could help the artists achieve some art and that got me out of the house and got me moving, made a big difference.

LaD: I was only thinking of me.

FLS: You’re supposed to only think of you.

LaD: But now it gives back in amazing ways because I did go onto the Registry of Artists’ Models, and I did register and I now have gotten to do some really amazing artwork with some artists in the Eel Pie Studios in Twickenham. I got to do some more with Dulwich Art Group… these artists are so amazingly talented… At first I wasn’t going to show any of my friends the artwork but because it was art I had to show them. One of the husbands of one of my good girlfriends – he just calls me juicy (which you know, there is nothing salacious in it), – he says it’s beautiful and my husband initially was horrified. He was so worried the first day when I went to the workshops, he was in tears, and when I got home he thought I had done something that was unsafe. Now he has seen what it’s done and how it’s changed me, and he just encourages me to go out. He’s offered to become my booking agent and everything, like my pimp!

FLS: [admin side of modelling, I can certainly do without]

LaD: As soon as he takes out the rubbish.

FLS: Sabine – you came to model with us at the BAC – we do model other places – in February and that was mostly before we started doing workshops, how did you find it?

Sabine: I found it really amazing, it was a great experience, I must say I’d never done this group modelling before. I have modelled before when I was about 20 and I was at university; I modelled for sculptures. I was doing architecture and we had some sculpture class as well. So that was a one on one thing. For some reason I didn’t do it in ages; I always did life drawing myself, so I was interested in posing, modelling. Then I came across Spirited Bodies because I went to London Drawing life drawing classes and (there was this chance) to get a bit of experience, and so I went there and it was a really amazing experience. First of all the group experience; there were artists and models and it’s not the usual one model and lots of people. It was also very desexualised I must say, which I really liked. It was a very relaxing atmosphere and yes, unfortunately in most of the other instances when I have modelled before there was a sexual aspect, between especially male artists and the models, so this classical ‘muse’ theme (of life models being courtesans etc) and that sort of put me off. It was a bit of an uncomfortable feeling, so I wanted to get rid of that, and with Spirited Bodies, I’m quite relaxed. That this is not the case and especially like today as well amongst women, it’s very nice and relaxing, and when I model … probably it’s a bit like Esther. I do like to think of poses, what I can do or when you set up the one with the queen (Arleen was our Queen with a court of female subjects), I immediately thought, ‘what can I do here?’ so I quite enjoy that part.

Sabine: Performance element, because I’ve never done drama and I’ve never been involved in theatre plays so that’s my way of expressing myself.

FLS: Have you gone on to do a bit more (life modelling)?

Sabine: I did indeed yeah. Again very suspicious about some male artists who really it’s pretty obvious if they have a group and they only employ female models. I think it is not a very serious thing because if you teach people drawing, you want to give them different bodies, male and female, so I just wonder why is it just female? They always give some kind of excuses, but it is just for someone to see a naked woman.

FLS: At one group – they loved drawing me but they wanted their work to be commercial (hence they prefer young, slim women), which tends to be more the case when people have come out of the advertising industry. People are not always honest about what they like, and they may go for the norm because that’s acceptable, the pressure we’re all under.

Sabine: Also the other way round, so… some people see me as the norm; yes, I’m slim and that is attractive. I am being reduced to that as well. I’ve been told a few times in my life by a boyfriend, ‘I hope you don’t get fat’, so I kind of feel that my appearance is in the way of having a loving and fulfilled relationship in a way. Again I feel quite confident with my body so the modelling is an experience for me, especially of not being an object, not being objectified and that is very nice.

Sabine: Yeah it is a bit of a contradiction but there is a certain distance that I feel…

FLS: One reason we wanted to share the modelling experience, share the good things in it, is to get a bit more respect (for artists’ models); not just the, ‘you get naked in public so you’ve got to be a bit dodgy’ attitude.”

LaD: In Dulwich, they hired me knowing I was a full sized model… full sized so I’m not miniature – and it was for a long pose, week after week. They were preparing artwork specifically for sale and they felt that everybody had paintings of thin naked women on their walls so they wanted something slightly different, so it does change, I think it really does change. Although someone put me in a bath tub.

FLS: I love that picture of you in the bath tub. Tansy, you’re young, thin – we’ve just been talking about that; how does modelling make you feel? How do you use it?

Tansy: Modelling helps me leave the house. I’ve had my own fairly severe mental health problems and I still can’t go to school. I’m 20 years old and I’m still doing my A levels because I lost about 2 years of education, and I’m home schooling because normal school is just way too stressful. Modelling forces me out of the house. Because I’m home schooling I live in this isolated bubble and modelling exposes me to the real world, it forces me to do things, because otherwise I can… just stay in my house and not leave for 3 or 4 days at a time, which is quite unhealthy. Over the last couple of months, I’ve been having quite a few negative days, where all I want to do is stay in bed. I feel incredibly apathetic and de-energised, and I don’t feel like I can cope with anything, but modelling forces me to challenge myself to get out of the house, to do something productive because its my part-time job now, I can’t be late, I can’t not show up, its work. I need to show up to do my job. And it gives me a space to have undirected thought. When I am posing, I just let my mind wander, it lets me see things in context, to help let go of things and stop stressing and gives me time to think through all of the stuff that’s going on in my life. And with my body, it’s made me think about my body more; less as a kind of object to fulfil other people’s desires and more as a collection of bones and tendons, muscles and nerves, which might sound negative but I feel like it’s positive because it’s given me admiration for my body as a kind of a piece of engineering, almost. I see it as much more than a vessel for sexuality. I think of it, I admire the shape of my hands, and I admire the way my feet can carry me around all day. I mean I weigh 72 kilos and my feet can carry me around all day. They’re not very big …and [they do the job] yeah and the way they can deal with any form of terrain or rough ground, go up hills and things… modelling has made me appreciate my body from that point of view.

FLS: We’ve had someone come and model in the same Spirited Bodies you did – which was SB 1 – and she came because she felt as a middle aged woman who had no children, she was invisible and that no one had anything to talk to her about. She wanted to come and model to, if you like, persuade herself that it was worthwhile taking care of her body and that her physical self still had value, because she could help other people with their art and she also found it a very liberating experience.

Tansy: My photographic bookings average about 4 hours, whereas life modelling are usually 2 or 3.

FLS: But the actual poses?

FLS: I’d find that demoralising to be honest.

Tansy: I find it demoralising sometimes but most of the time, I don’t care.

FLS: It’s developing that resilience, not to care.

EB: Thank you, we are just about coming to the end of that pose.

Photos are from the event, copyright of Sophie Stanes, www.livinglifethroughalensphotography.co.uk; unfortunately we do not have the names of all the artists. 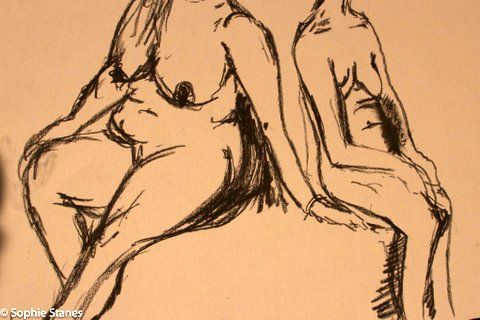 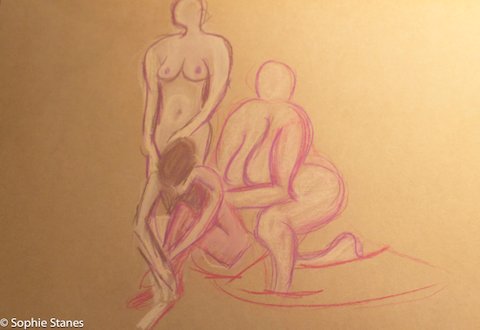 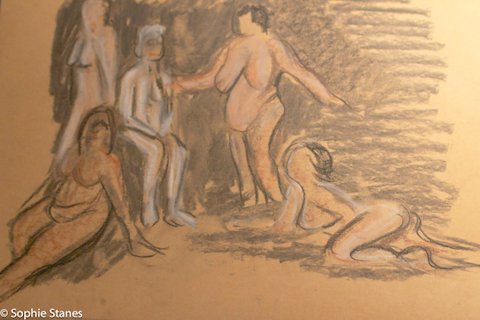 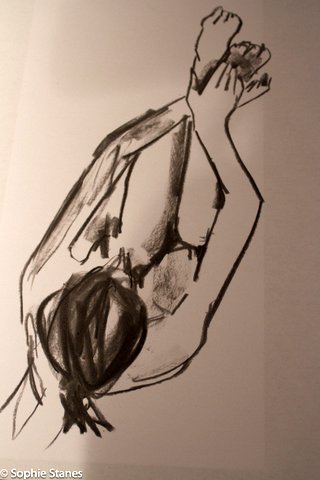 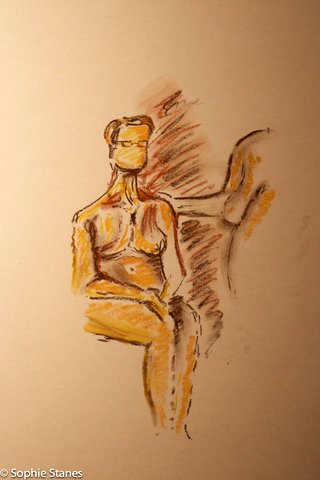 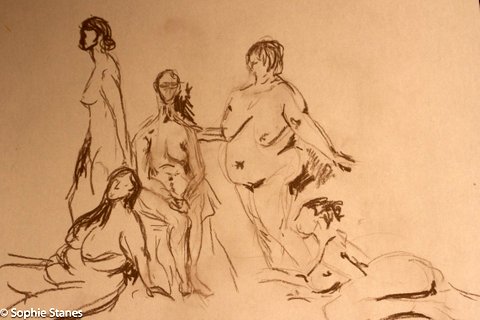 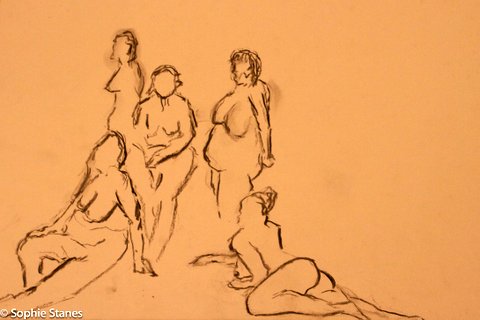 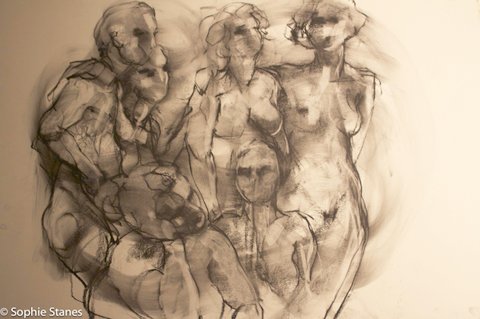 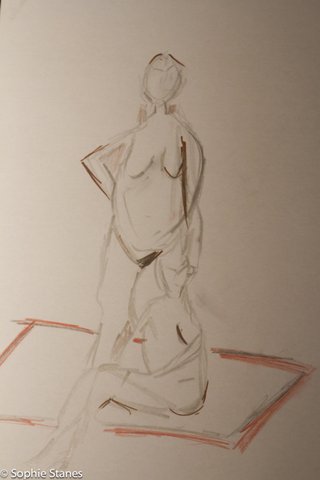 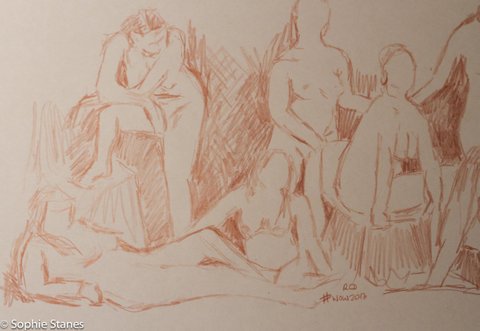 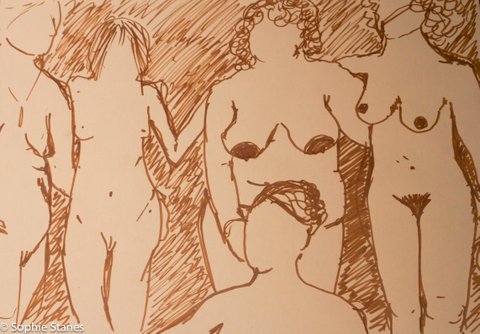 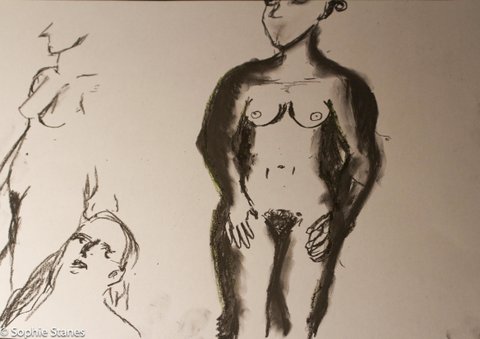 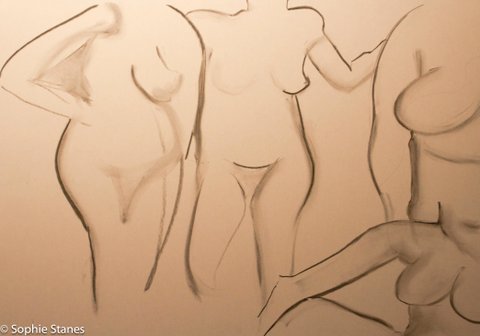 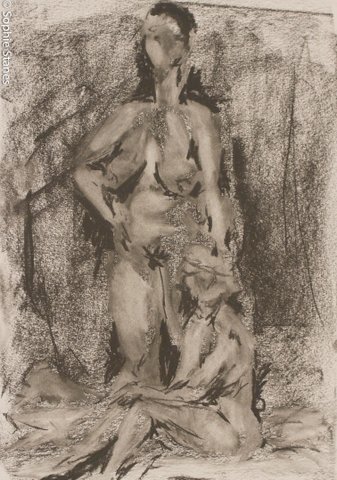