Skip to content
An artist friend Lily, described the power evinced by the model when delivering words, poetry whilst posing. The total stillness (of the model) contrasting with the presence of the words expressing the essence of the model/performer with such intensity. The words, normally danced as enunciated, skipped into the space on stage; now squeezed through the tiny holes of the face, the only part of the body moving except for breathing. Potent words given extra fire by a taut poise extreme in stillness.
She was speaking of our mutual friend Ursula who has appeared on these pages before (a few times), a life model and performance poet who sometimes combines these talents. Lily said that unlike the other artists present at the recital described, she felt unable to draw whilst the words were spoken, so transfixed was she on Ursula’s delivery.
Then we imagined non-linear words which do not require a level of concentration antithetical to the focus necessary for drawing, but instead circular words sung as a mantra, harmoniously and in congruence with a chorus of models humming in accord. Sound that allows you to join in seamlessly so you lose yourself not only in the looking, but the calling, the surrounding of the sound these models make. These are more than bodies, they give you something else of their being for you to respond to. Like an orchestra they have a conductor, and this will be a naked symphony.
Particular models will be featured as singers in this avant garde explosion of sound and harmony; Christine, Tom and Ursula. It happened that Ursula composed this poem late last year and it does resonate with the theme at hand.
Drawing Symphony
like an orchestra
it feels
as the artists
draw their lines
on their canvasses
and in so doing
moving their hands and their arms
as if they play their violins
in an orchestra
like a drawing symphony
this is
with me, model, conductor
as the artists
follow my outlines
until the shape of me
is reproduced
on the other side
of the assembly of easles
with their canvasses
with the artists, the instrumentalists
artistic reproductions appear
out of some sort of nowhere
because the canvasses were blank
before my outlines started to appear
I have been drawn
with pencils and brushes
like a string on a violin
I have been drawn
I have been realized, mirrored
abstracted or elaborated
or improvized like jazz
I have been composed
like a piece of music
I sing, the echoes of my shapes sing
the artists give me voice
we can say something
together
they in their drawing
me in my posing
we speak
we have a dialogue
I call and they respond
I admire how they respond
so artfully, accurately, abstractfully
they represent me
it’s the drawing symphony of artists
that gives me voice
that translates my stillness
into music, patterns, colours, liveliness
life-drawing-ness
we speak together
for we have something to say
we come to life
in the life drawing
we model, we mirror, we muse
we make
music.                              © Ursula Troche, 12.2012 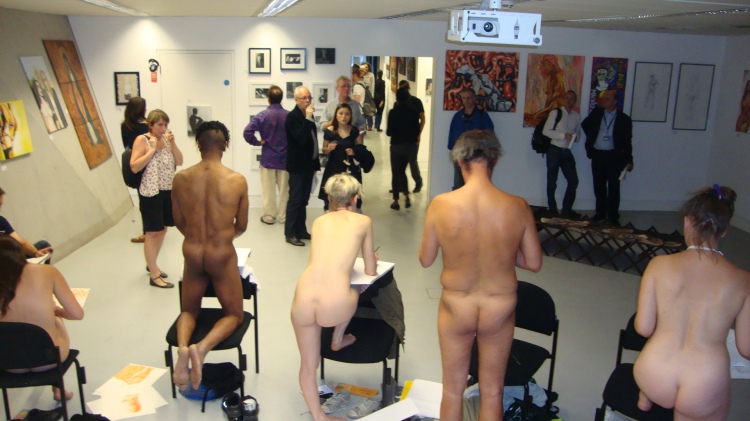 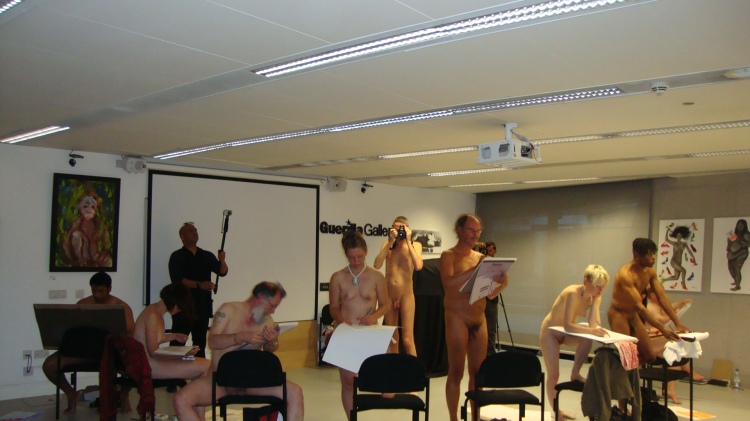 Steve’s blog describes this event in greater detail and length, with more pictures. I may write more on this very interesting occasion in future. 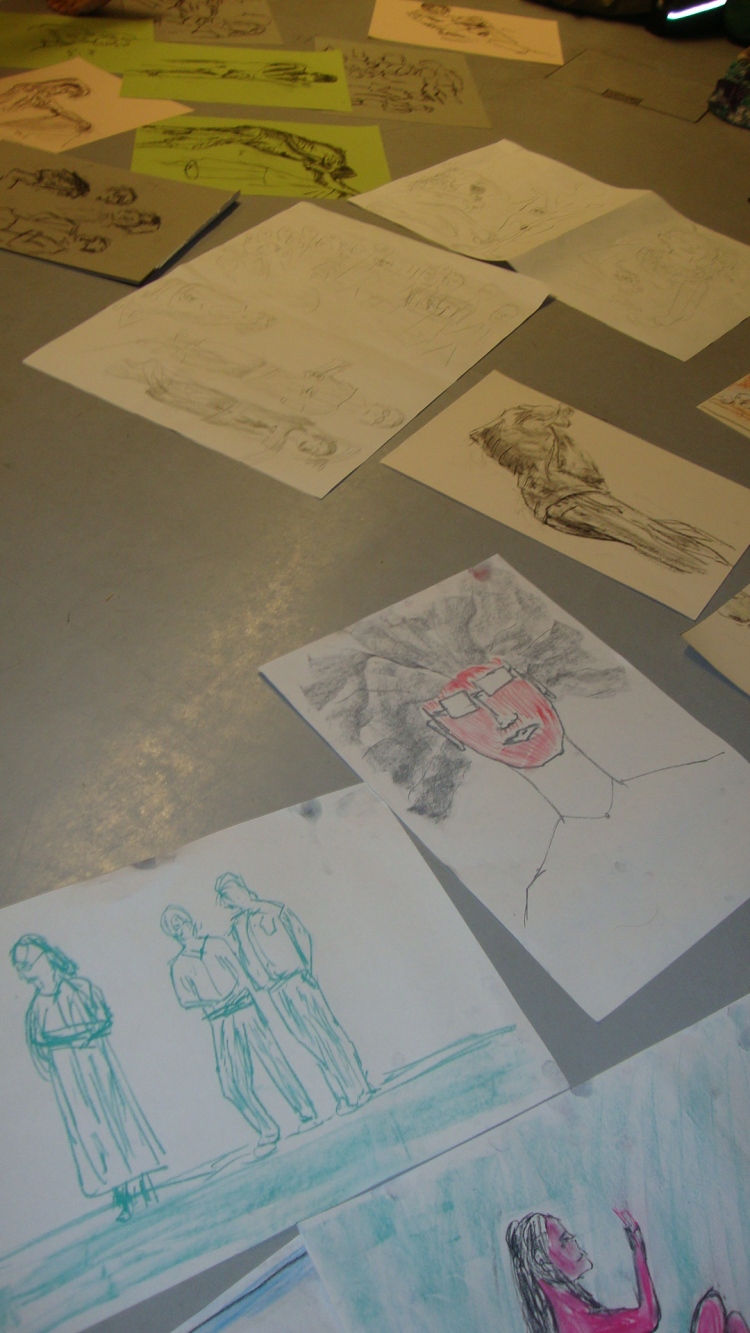 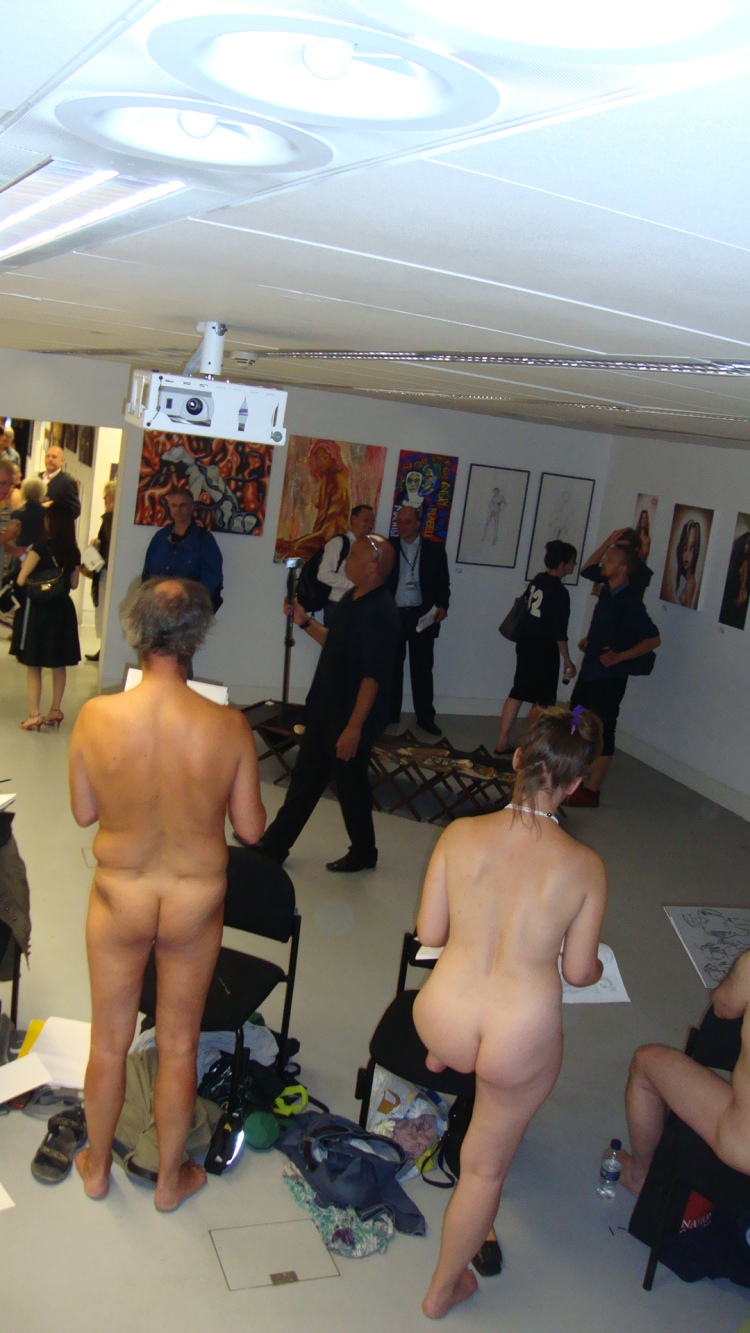 You can book for The Drawing Theatre event ‘A Human Orchestration’ here (to come and draw). Get in touch if you are interested to model, though I am sourcing most of the models amongst those who have worked with us before.
Ursula will be celebrating her birthday on Saturday (21st) at ‘Stables in Exile’ (The Bar Gallery), Unit 5, Queens Parade, Willesden Lane, a few minutes walk from Willesden Green station from 6:30pm and this is an occasion to see her perform some poetry as well as draw her and me – clothed. I will do some movement. This is a free event, do bring a bottle/some nibbles.

4 thoughts on “‘A Human Orchestration’ with The Drawing Theatre, October 12th”