On the eve of my travelling to the Highlands in late July, arrived an email from Joanna of All The Young Nudes – the Scottish life drawing organisation that runs groups in Glasgow, Edinburgh, Dundee and Aberdeen. I was invited to bring Spirited Bodies to the Edinburgh Fringe festival again, as one of ATYN 4 special events there. I was offered dates and was immediately keen; August generally being quiet meant I had time, and it had been such a fun gig last year.

I first worked with Joanna in 2013 when Lucy, Thelma and I had driven to Scotland and created 3 separate Spirited Bodies events – one in Glasgow at The Flying Duck with ATYN; and two in Edinburgh – one at Marchmont St Giles Church hall, and one at St Margaret’s House (formerly Arts Complex).

Time was short as the next day I was travelling North, and for all I knew might well have poor connectivity once in the Highlands. So we quickly arranged a date, and I made the necessary bookings for transport and a room. I also put out a call on social media to let people know that I was coming – and was looking for people to try modelling for the first time, as well as for experienced models keen to join in. Steve would unfortunately not be able to join me this time due to work commitments, which he was very sorry about, partly because he likes joining in the modelling, also the social aspect of meeting all the models. And then there’s visiting stunning Edinburgh!

I had about a month to prepare, and gradually a mix of newcomers, familiar faces and experienced models got in touch, interested in taking part. A lovely variety and refreshingly all seemed most genuine. In plenty of time before the event there was a group of 10 models emerging, and I had to turn several others away. I then set to sending them as detailed instructions as possible on what to expect, especially for the total newcomers. I described a couple of poses that we would recreate from last year, and in a later email outlined the full pose schedule. There would be 4 poses in the first half, then a break, followed by 5 poses in the second half. Our venue was the light and spacious Whitespace at Norloch House.

We would begin with the chain of movement pose where the models are positioned in a circle and take turns to move a little until they touch the model next to them. At that point they freeze in a new pose, and the next model is released into motion, so that at any one time, one model is moving and the rest are still. I advised them not to leave themselves in too awkward a position at the moment of freezing, as it could be a while till they could move again. I also said they could modify a tricky position to deal with that very predicament, so there was flexibility, and the models’ comfort was paramount. This is meant to be a positive and empowering experience of being part of the creation of nude art as models, and is not the same as modelling alone for a job. The models are not being paid, so they are doing it to gain experience, whether towards getting work, for personal reasons or because it’s something they enjoy.

The second pose was a 5 minute dynamic pose where they would balance the space, which means spreading out across it evenly, rather than the relatively tight circle they had just been in.

I abandoned the pose I originally had in mind to go next. This was because the session was half an hour shorter than I had thought! So I trimmed a few poses by several minutes and scapped an idea for a court scene. I considered that this tableau would be the least simple to put across with 10 nude figures. Plus in the interests of gender equality I would have to insist on some of the women standing for the roles of judge and lawyers, but I didn’t really want to do that as they’d all been stretching themselves considerably in the previous poses.

The following pose on the agenda was a recreation of Gericault’s famous Raft of the Medusa, which we have done before at Spirited Bodies, most notably in 2012 at a Christmas event in Mortlake. This suits a longer pose, and 25 minutes was scheduled. With a more coherent tableau, artists may hopefully be inclined to draw the whole scene, however challenging in the relatively short time. Several figures are lying down as either dying or dead, on what remains of a shipwreck off the coast of Africa (the scene is based on a real life event that happened 200 years ago). Some upright figures are looking out scanning the horizon for help. There is a sense of urgency and poor weather conditions heightening the drama. Overall the picture has a diagonal trajectory which informs the gaze and gives it direction.

I asked if anyone was by chance prepared to stand the duration. I encouraged by pointing out that standing figures are often more likely to be drawn, and it’s good practice for any budding new models. A willing participant came forward and I suggested distributing his weight between both legs to make it easier, and in any case that would lend an appearance of strenth since his role was as a leading figure in the ensemble, perhaps even mimicking the position of the mast of a ship. Another new model sat by him on a chair, also looking out to the horizon. Several models were strewn across the raft, less than alert if maintaining interesting angular forms, while two experienced models took on the most challenging roles centrally. Jude from Cumbria kneeled in the poise of a desperate prayer to the heavens, holding an expression of fear and dread throughout. Behind her a male model was upright on his knees, mainly on his right knee and twisting his body to the head of the raft. Our picture was complete and a very fine recreation it was.

As the pose drew to a close, we had 10 more minutes until the break, so I brought forward a pose from the second half. This was another revisiting of a favourite pose from last year – the models imagine that someone they weren’t expecting to be there, walks in the room! Someone whom they might not wish to be seen by when nude, or who might themselves be embarressed to witness the nudity. It makes for a potentailly expressive gesture, whether the shyness of a new model, or the out there brazenness of a seasoned professional.

The break arrived and the models were most ready for it. They checked out the drawings of them, chatted excitedly, and we made use of a nice evening light outdoors to capture a group pose in robes. It was just a 10 minute break as we wanted to maximise the modelling and drawing time which already requires more time between poses than a usual session, with so many models including novices to arrange.

We began the second half with three x 3 minute poses. My direction to the models was simply concerned with their connection with each other; for the first pose they would be huddled together, the second they would break away a bit, and for the third they were to be completely separate and more individually engaged with the artists. Within that they could find whichever poses felt right for them.

After this burst of dynamism they settled into the final long pose of about half an hour. The scene was paradise, with strawberries! They could find more comfortable positions, holding strawberries which I handed out once they were in pose, and some of them were relating to each other. All The Young Nudes had brought some pillows and pieces of fabric which were made use of, as well as two large arm chairs which belonged to the venue. 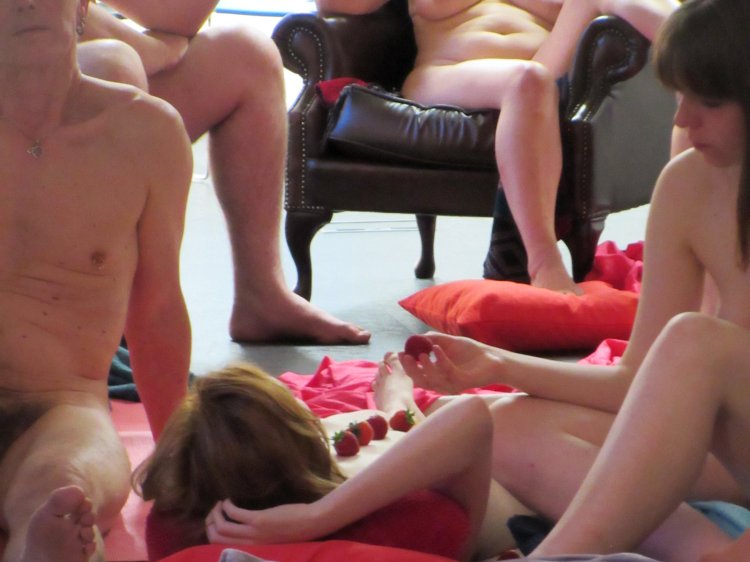 It was lovely to see how the artists had risen to the challenge of drawing ten models! Some beautiful works I am sure you will agree. The models themselves had given a lot, many of them trying something completely new and very much embracing the chance. I hope they find many more opportunities to pose for art, feel comfortable nude, as well as share the joy of this liberation. It was wonderful to meet them, and also spend a bit of time afterwards together over a drink in a nearby pub. We were lucky to find enough space in a bar in central Edinburgh during festival time to accommodate our large group. Fortunately Keira from All The Young Nudes guided us towards The Red Squirrel where we quickly found a couple of tables together.

Finding out what motivates people to get involved, and how they found the experience makes the occasion more whole. A few artists joined us too, so some drawings were being shown.

This event was a lot of fun and most enriching. I hope to return sometime.

One thought on “Spirited Bodies with All The Young Nudes, Edinburgh”