Spirited Bodies presents the next Stories of Women event, featuring co-founder Morimda, a professional life model of over 20 years experience. This will be held on Tuesday September 25th, 7pm – 9pm at The Feminist Library.

From being an extremely shy person, it was through life modelling that Morimda emerged – found out who she was and was able to express that to other people.

Morimda did not do well in school, so her parents tried to arrange a marriage for her when she was 16. This was when she first realised the power of saying ‘No’!

She was extremely shy, and living in Paris found herself in relationships but was unable to come out of her shell, and deep down she knew that the only way to properly emerge as herself, was to be alone, a single woman in order to find her own voice. She wanted to come to England and learn English, and pursuing this dream gave her the strength to say ‘No’ for the second time, to an episode of unfulfilling relationships in France.

In London working as a window dresser, she wanted to be a mannequin! That was when she hit upon the idea of becoming a life model. The futility of continually being sacked, basically because she was shy, pushed her to actively take on becoming a full time life model. Her 3rd ‘No’ was when she refused to keep looking for a more mainstream job.

She discovered how liberating it was to be nude, to own her body, and learnt through this profession the subtleties of her own boundaries more clearly. For the first time in her life, she stopped feeling ugly and like a failure for not fitting with conventions. Her confidence developed as she learnt how to manage herself as a business.

Modelling helped Morimda to cure her depression, as it allowed her to be herself, to accept herself, and in this way encouraged her innate inner joy to shine through again. Through the life model network she was introduced to Buddhism and chanting which is a strong focus in her life to this day.

She is very keen to empower other women about their bodies, nudity and sensuality, as she truly feels that modelling has given her so much in these regards. It helped her to be aware of the significance of posture, and how each of us have different shapes and forms to play with. She was inspired to come up with the idea for Spirited Bodies, whilst posing at the Mall Galleries in 2010 before sharing it with Esther & Lucy. 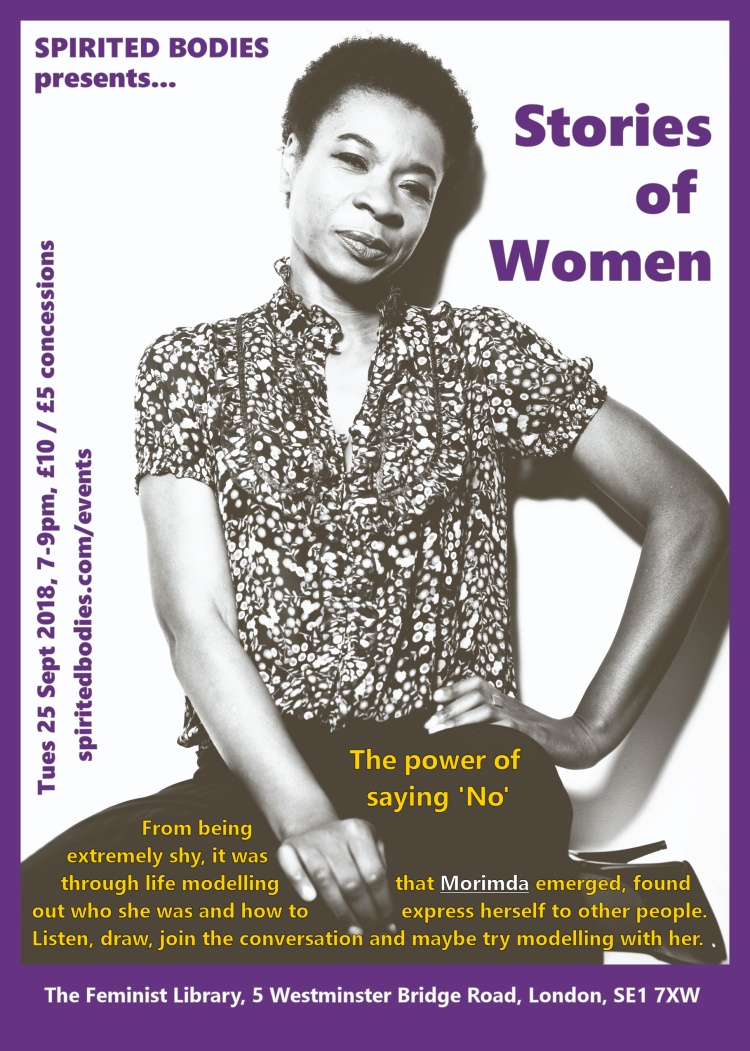 Life modelling and drawing are a really good way to address body image issues, as well as gaining confidence and broadening our experience by stepping out of our comfort zones.

At this Stories of Women event there is also the chance to try life modelling yourself, or you may come to draw and/or listen or join in the conversation. During the second half there is a discussion about the body politics of life modelling and related matters. There is guidance for new models – no experience necessary, and some drawing materials are provided – again no experience necessary.

For more information about this event and to buy tickets online, see here.