On Sunday 10th March at Women of the World Festival, Southbank I attended the ‘Endangered Bodies’ workshop. Endangered Bodies are an international initiative who ‘challenge the merchants of body hatred who turn girls and women against their own bodies’. ‘Anybody’ is the UK chapter and is lead by feminist activist and writer Susie Orbach who was in the audience, while a team of young women presented the session.

This workshop was focussing on the language we use to describe ourselves, as women. On several seats occupied by the audience were cards with quotes written on them. The occupants were asked to read them out; they were negative, some about fat or older women (e.g. “Doesn’t she have a mirror and a scale?”), very cutting. At the same time, we the audience watched a silent woman on the platform in front, sitting as if caught looking inwardly as she overheard the comments. It was about the way we look at each other, possibly critically, without thinking, and how it makes us feel when we transfer that judgement on to ourselves, I thought. All quotes had  been gleaned from The Daily Mail including the comments of readers as well as articles.

We were asked to move to part of the room without chairs so that we could position ourselves in the space on a sliding scale of positively agreeing, and strongly disagreeing as several statements (which I have turned into questions) were read to us, largely centred on our feelings about womens’ magazines. Do we read them? Do we use them as a style guide? Do we think they are responsible for women having body issues? Is talking about women’s appearance a good way for women to bond? Are women naturally more bitchy than men? Is it our duty to inform our friends if their clothes don’t suit them? Roving mics picked up audience response as we went along. A lot of it I found fairly predictable; we enjoy our turn on the mic, myself included, but we are speaking to the converted. It was pointed out that a lot of this talk focusses on negative situations without actually doing anything to improve circumstances… though by raising the questions it did, it perhaps encourages all present to take them out of the room. The ‘Anybody’ group do a lot of work in UK schools which is possibly where they are most likely to be affective. 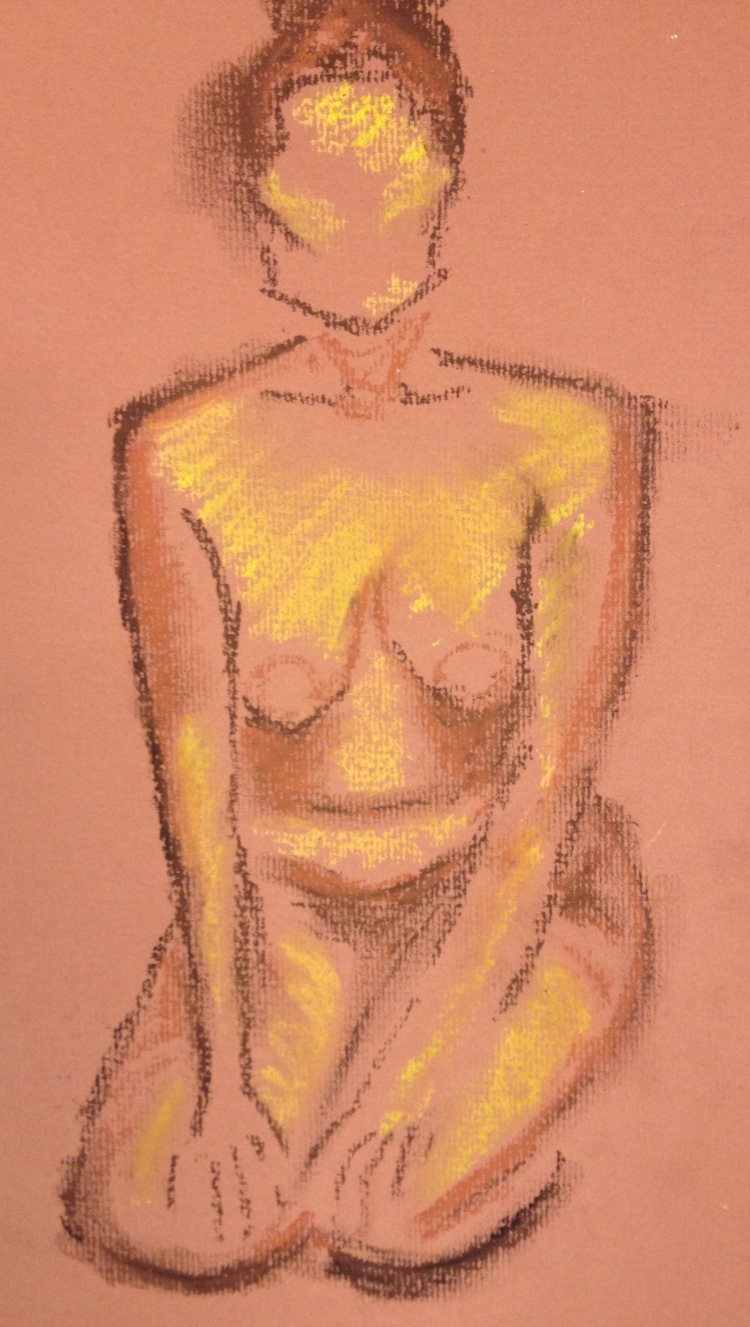 Back in our seats, the hostesses brought our attention to several questions on screens in front;

How do you talk about your body/yourself?

How do you talk about your friends and their bodies?

How do you talk about people you don’t know and their bodies?

How do any/all of the above affect the way you live your life?

What can we do differently?

An editor for lesbian magazine Diva explained that when they tried to run campaigns using ‘real’ models, readers wrote in to complain. A marketting director confessed that part of her job was to choose images of women based on very rigid parameters of convention regarding fashion, and to talk about the figures of the women in that context. She was ashamed of reducing women to commodities.

A writer for womens’ magazines was more positive, believing that change must happen from within the industry (as well as within each of us). She had written about ‘real’ women several times and noted she was not alone. I can testify to that, we having appeared in the Daily Mail’s women’s magazine! I piped up that I am ever descibing my life modelling friends’ physicalities in order to help them get work, so I am used to talking about bodies as they are; rules of offensiveness and flattery applying in an entirely different fashion in my world.

Another woman described how her latest workplace surprised her as no one comments on the way she or others look ever. She said it gave her space to think about herself for herself, without apparently even subtle interference. 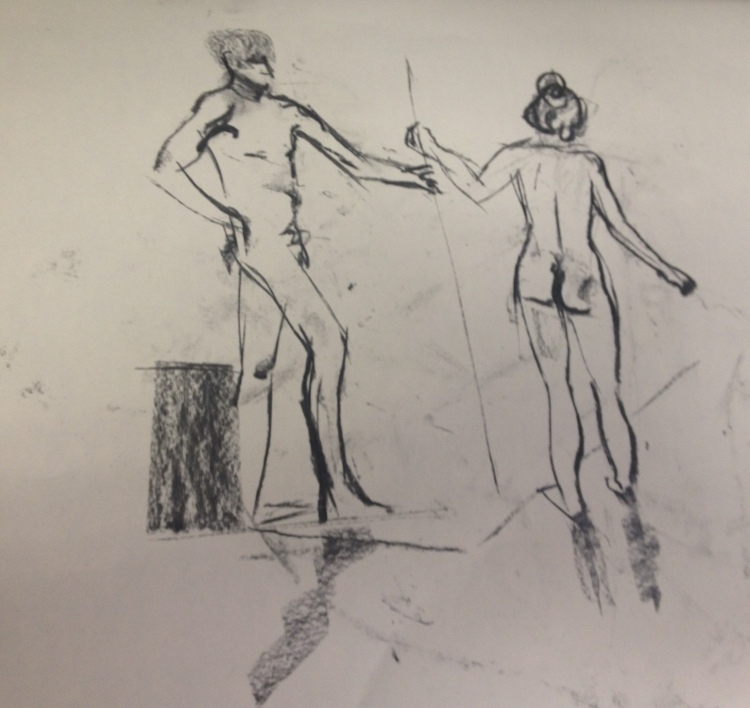 One of the workshop leaders talked about the pressure on Facebook to have a profile picture that receives a lot of ‘likes’, and how one way round this is to sabotage all photographs taken of one by pulling a silly face, thus undoing the possibility for the usual ‘stunning’ comments – the rush of typical affirmation which may in fact be damaging for us psychologically. Instead of playing up to idealised standards of beauty, find your worst angle and celebrate that! 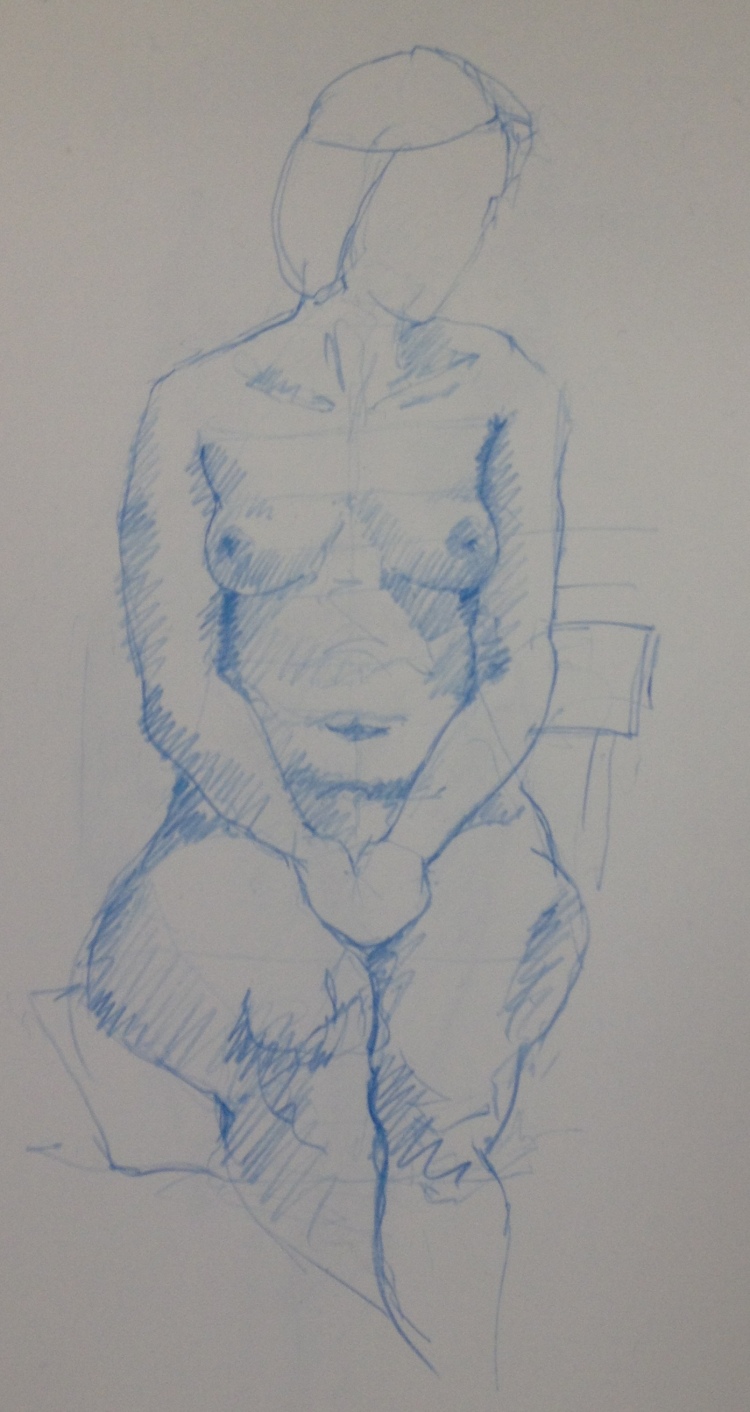 The cult of creating our online profiles can encourage all sorts of editing of appearance, which may especially affect young people negatively.

The high proclivity of especially young women dieting was discussed, and how bringing up the subject when one is concerned about a friend dieting unnecesarily is fraught with tension. A teenage girl mentioned that in her school, girls were doing the ‘diet coke diet’ which included just that ingredient. On bringing up the topic as a concerned friend she got told she was bullying. 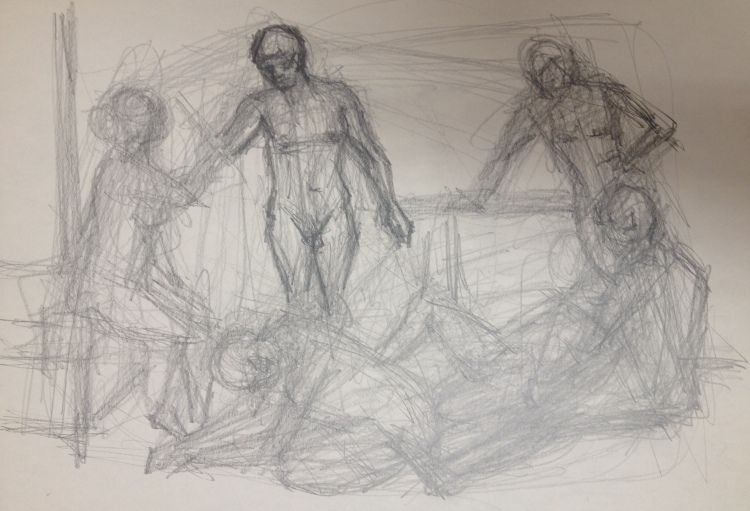 Older women reminded us to be grateful for what we have, and that true confidence does oftentimes come with age. Someone advised us to practise saying ‘I love you’ into a mirror!

Another woman talked of embracing appearance as self expression, a part of communication and a way of projecting ourselves in new ways beyond negativity. It is after all a privilege to choose how we look .

All images in this post are by artists (and models) who attended the workshop last Tuesday in Telegraph Hill; Rade, Francis, Dijah, Geoff, Donald, Mattie and several others.

This was a super workshop with 4 female models and 4 male, plus several artists. Poses covered various themes.